Did you know?
You are out of milk again.

Did you know?
You are most definitely not being watched.

Did you know?
We love you very, very much.

Did you know?
Your first moon landing was in 1969.

Aliens Invade Earth Again but Find Nothing of Value

Hello fellow bloggers and viewers. As you may have heard, aliens (or if you'd prefer to use the more progressive term--other-worlders) have once again set foot on Earth. This time instead of just draining some of Earth's natural resources they decided that nothing here was worth bringing back to their homeplanet. It was truly devastating to the reporters who interviewed those from Plant Delta 80 as they realized that they had just wasted the time of beings from outer space with technology that far surpassed their own. However, this cannot be confirmed as the reporters were never found although their notes were left behind on top of piles of ash. The following is an excerpt from one of the interviewees:

You fools. We have been around since the dawn of time. Do you honestly believe we ever found your speck of a planet useful? We simply sped up the process of your extinction by draining some of your irrecoverable resources. We had hoped that this would prevent us from having to get rid of you ourselves a few centuries later; for the first time we were wrong. Are you taking notes... on a notepad? Pitiful. We had surpassed your intelligence before we even created an official language.

Hmm... there must have been a translation error. Anyway from this I can conclude that our interstellar neighbors were simply trying to touch base with us and explain how they no longer needed our supplies to help their economy's growth. It's really fascinating how much we, as the human race, have had such a major impact on those not from Earth! This is truly an exciting era for us all!

See you next time,

Dr. Mac in association with the EchoChamber--guiding people's beliefs since people! 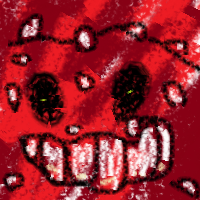 "This portrait of one of the outer-space visitors was created by local third-grader Milo Cole. Truly an inspiration to those around him that don't believe they can create realistic paintings."